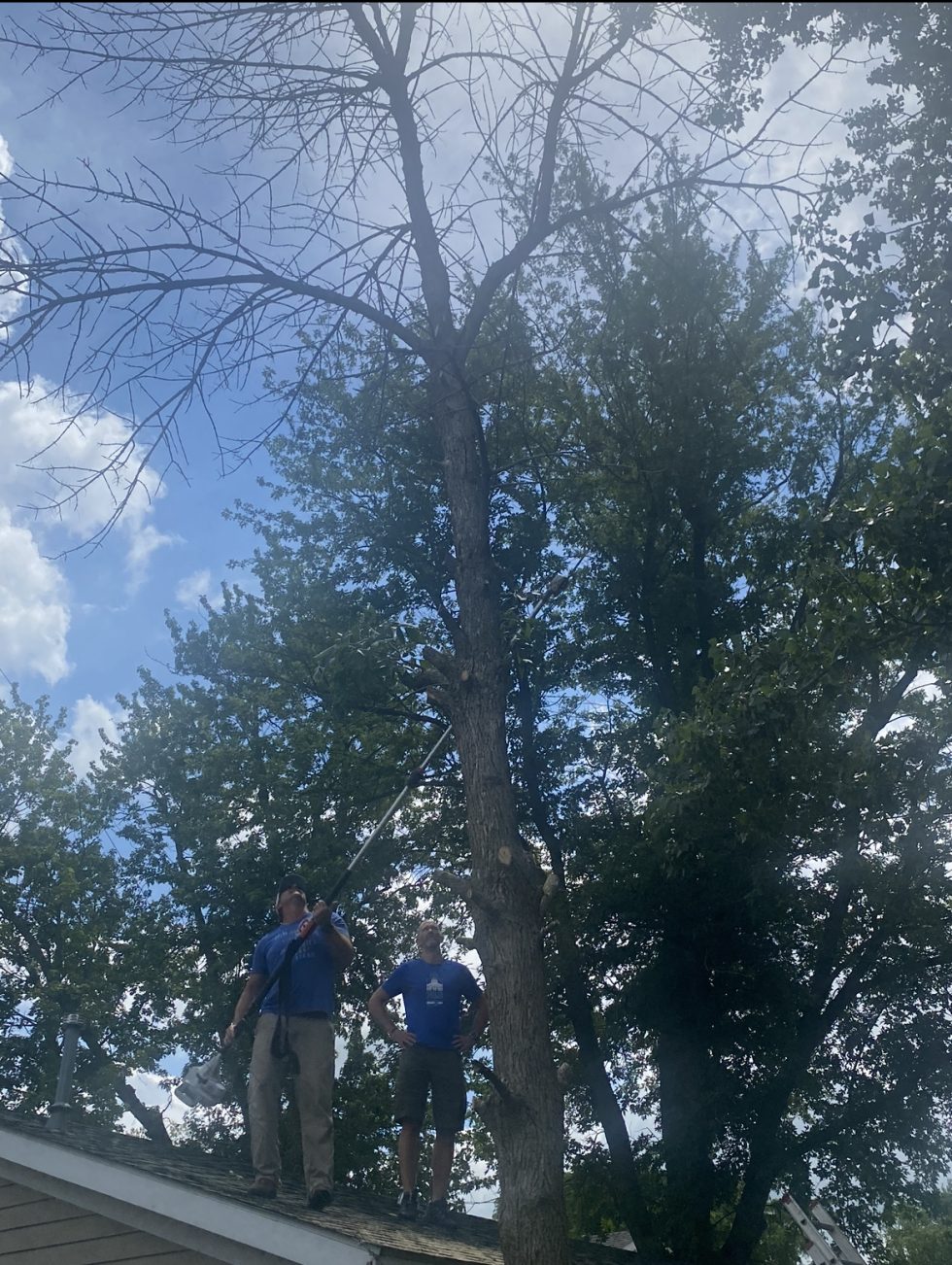 When was the first you had that same realization?  When did you fully notice that you don’t have the same energy level that you did in your teen years?  When did you realize that you have to pay for a crappy night of sleep or pushing it too hard on a workout or even a simple home improvement project.

Ok.  I know.  I sound like I am a great old person here, but bear with me.

Several weeks ago, I was recruited, along with Amy’s brothers, to cut down a tree.  No big deal, right?  Except that it was right against the garage and hanging precariously over the neighbor’s ham radio antenna.  What could go wrong?

Well, apparently a lot could go wrong as I posted a video of us with ropes tied to the tree, standing on top of the garage, pulling on said tree as Derek leaned over the edge from the garage to cut it.  Judging by the 5,000 views on Instagram, I think most were hoping for a great fail- the tree hits the garage or someone falls off the garage or any number of things.  Nope.  All ended well. No memorable fails- at least on video.

Until we went to the other side of the garage where many limbs were hanging low and needed to be trimmed.  Long story short, we had a failure to communicate and I found myself under the branches as the chainsaw released them.  Right shoulder and left thumb took the brunt. I was instantly confronted with my poor life choices- first in being a part-time lumberjack and second in being under the branches when the chainsaw was running.

I thought I was seriously hurt.

Off of work hurt.  Pondering the 90-day wait period on my disability policy hurt.  Explaining to people that I made a stupid.  Yeah, that kind of hurt.

Where was the video on that one? Long story short, I dodged a bullet as my thumb has finally fully recovered and the shoulder is good.  As good as shoulders get, right?

Man was I sore the next day.  And short on pride, let me tell you. That one stung me. To realize once again that our decisions have consequences.

And it reminded me of the fact that we have finite energy.  And many of the things we do drain it.

We also have finite mental energy.  Did you know that many of the most successful people in the world manage their mental energy by doing some of the same things day after day? Steve Jobs wore the same shirt and pants every day (I am guessing he had a ton of them) to eliminate one decision.  Some people eat the same breakfast or drink the same coffee or always have the same routine.

They know that the fewer decisions we have to make, the better.  Because we lose energy the more times we have to make a decision. This might be why some of us can’t choose a restaurant to save our lives.

So what if we tried some simple things to minimize the decisions in our lives?  We will always have big decisions but what if we cut out a few of the smaller ones?  And also pondered what things we can do today to set ourselves up for success tomorrow?  Easy things like meal planning, meal prep, laying out clothes the night before, and planning our weekly schedule on Sunday afternoon or Monday morning. Or taking 5-10 minutes at the end of the day to get our workspace organized so we are ready for a productive day tomorrow.

I got a truckload of grief for having the same thing for lunch every day for years- a sandwich, yogurt, and an apple. But guess what – I always knew it was one less thing I had to think about.

Decision fatigue is a real thing.  One way to #WINtheNOW is to give our brain a rest. And have fewer decisions to make.

And to be careful when cutting down trees.  A better decision would have been to pay a professional!  Oh the things you do for family. I guess the pay was well worth it- a meal of roast and sitting around the table with people who are very important to us.